Hello horror fans, I think it’s time we got to know each other a little better. This is why I’ve decided to talk about one of my favourite horror movies of all time: Ginger Snaps, directed by John Fawcett, written by Karen Walton and starring Katharine Isabelle and Emily Perkins.

Ginger Snaps (2000) is the first of three films, followed by Ginger Snaps 2: Unleashed (2004) and Ginger Snaps Back (also 2004). The trilogy, with its edgy wit and sarcastic bite, marks a milestone in Canadian horror cinema. The first film in particular captures the zeitgeist of ironic late-nineties youth culture perfectly, with “likes” and “whatevers” galore. It’s a film that understands young women and portrays them as complete characters while giving their issues top billing. As if that weren’t enough, it’s a near-perfect genre film that understands its place within the horror canon and deftly applies horror themes and aesthetics to its unique subject matter. You can call it a werewolf movie about puberty, or a coming-of-age film about werewolves, but to do so would be to glaze over the myriad intersections of this deceptively simple fusion film. The result reveals new insights into the parallel processes of adolescence and lycanthropy. 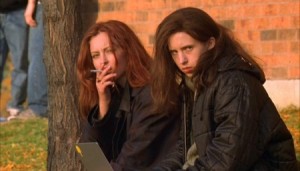 Ginger and Brigitte are two nihilistic teen sisters with an unhealthily close relationship, united in their hatred of their parents, their school, and their suburban lifestyle. Their mantra is “out at sixteen or dead in the scene, but together forever”. Both girls hide beneath baggy, dark clothing and scornful sneers. They fear adulthood, more specifically womanhood, and its accompanying loss of identity, and fantasise about ensuring their individuality through death rather than growth. I think many girls and women can relate to the feeling of being pummeled with Gender from the onset of puberty. It’s a time of physical change and emotional shame, when “woman” still feels like a dirty word. Then comes the fateful night when Bridget gets her first period and is brutally attacked by a ferocious werewolf in the woods. It’s hard to tell which is more upsetting to her. The pubertal changes that follow, such as bleeding, cramps, hair growth, increased sexual appetite, etc., become practically indistinguishable from other, more lupine developments.

Menstruation and horror are an oft-neglected match made in heaven, most likely due to the taboo (originally a Polynesian term for “unclean” women on the rag) surrounding menses. Women will even refer to awkward period moments as “horror stories”. TMI, amirite? Various beliefs found in cultures the world over proclaim menstruating women to be possessed by powerful sexual and reproductive forces, and require that they remain in isolation during this time, for the safety of others. The source of confusion is obvious; bleeding is nearly always a sign of danger… except when it happens to women every month. It’s also easy to see how declaring someone unclean for her natural biological processes serves as a form of moral subordination, even as it grants her a kind of spiritual power. Such depictions of women, like that of the wicked witch, are as old as dirt. The most obvious example of menstruation in another horror film would be Carrie (1973), in which the title character’s menarche is a traumatic moment that provokes a dark power that she has possessed since birth. This only foreshadows the even bloodier and more humiliating incident where she is doused in blood at her prom. We all know what happens next. The difference between Carrie and Ginger is that Carrie has always had telekinetic powers and the “curse of blood” is just part of the pattern of shame and oppression that culminates in utter destruction at the prom. This is a firm connection, but in Ginger’s case the relationship is explicitly causal, so much so that there is often ambiguity between the biological horrors of her female curse and the bestial horrors of her wolf curse.

The link between menstruation and the lunar cycle is not a huge stretch. In fact, the word “menses” comes through Latin and Greek variations of “moon”. There is even some evidence to suggest that women’s menstrual cycles correspond to the lunar cycle in cultures without artificial lighting at night. With all of that in mind, it’s almost hard to believe no one thought of making a werewolf-menstruation film before Ginger Snaps. Perhaps it’s the typical association Hollywood makes between wolves and hyper-masculinity. But we soon learn that in Ginger’s case, it’s best to “forget the Hollywood rules”. Indeed, Ginger Snaps plays counter to expectations by virtually ignoring the cyclical werewolf in favour of adopting a linear transformation similar to puberty. This more closely corresponds to Ginger and Brigitte’s real fears: the gradual and permanent transformation and loss of identity that they would rather die than endure. This is why the film changes the usual rules, and it is this well-considered twist that makes Ginger Snaps a standout genre entry, one that knows the rules but doesn’t have to obey them, just like its rebellious teen protagonists. None of that silver bullet nonsense here; these are postmodern werewolves we’re dealing with.

You could easily go on forever about this movie and how it comments on gender, puberty, werewolves, teen (and female) sexuality, bestiality, genre, teen angst, sisterhood, and even Anglo-Canadian identity and postcolonialism. In fact, I’ve included a list of articles written by scholars who do go on forever about all of these things and more. That alone should help illustrate just how great a cult following this movie has. Its depth and complexity are hidden under a dark, furry coat of entertainment value.

Not only is it clever; it’s also very funny, and for a movie about werewolves and puberty, it can even be pretty subtle. Watch for a crane zoom into the dark entrance of a blood-splattered dog house in the opening scene. Sure, you don’t have to be Freud to figure that one out, but you do have to know what to look for. In another scene, Brigitte finally finds the coveted potential cure, monkshood, at home after her housewife mother bought it at a craft store. The cure to the curse can be bought at a craft store and then cooked by a teenage pot dealer and injected like heroin. That’s more ironic, self-deprecating humour than I know what to do with, and I’m Canadian.

So that’s Ginger Snaps, and it’s one of my favourites. And if you like your werewolves mixed with equal parts Angela Carter and Heathers (1988), then it might just be one of your favourites as well.

And don’t forget to check out my old blog, Terrifying Treats, for a very different response to Ginger Snaps.

United against life as we know it,

Miller, April. “‘The Hair That Wasn’t There Before’: Demystifying Monstrosity and Menstruation in Ginger Snaps and Ginger Snaps Unleashed.” Western Folklore 64.3&4 (2006): 281-303. Web.